Sydney, N.S – A local massage therapist is donating five dollars from every session in the month of February to the Cape Breton Regional Hospital Foundation for cardiac care.  Megan Shepard, RMT has moved to a new location and had to slightly increase her rate, so she decided she wanted to pay it forward. “I had to increase my rate by five dollars, so I wanted to make sure I did something important with that money,” Shepard said. “I’ve seen the devastation of a loss from a heart attack, so I want to help others who need it.”

It's been nearly three years since Shepard’s partner, well known fiddler Marc Boudreau, passed away from a sudden heart attack at 32 years old, but the pain is just as fresh. “I can still remember how hard it was to deal with, it felt like I’d never be the same.” Today, Shepard is a registered massage therapist and finds comfort in healing others. “I like releiving people, increasing mobility and improving pain. To be honest it helps me relieve my own pain.”

Boudreau, originally from Chéticamp, was a paramedic since 2004 and started playing the fiddle at eight years old. The young musician grew to be quite talented, playing at the 1998 East Coast Music Awards, beside many of his idols such as Ashley MacIsaac, Natalie MacMaster, Buddy MacMaster and the Rankin Family. He recorded two CDs and played hundreds of shows all over the country.

Beyond music, Boudreau loved to play hockey, crib, and was amazing with children. When Megan Shepard met him, he was instantly close to her two year old daughter, Jonah Mae. “He was so important to her and she was to him,” Shepard said, with a smile of longing and loving. “That’s why I want to do this, so other people can have access to important cardiac care.”

Shepard’s practice moved to the Planet Beach building at 55 Townsend Street in Sydney just this week and she now offers a full range of massage therapy. From relaxation treatments to therapeutic treatments and even deep tissue massages, her sessions are thirty, sixty or ninety minutes and she direct bills to most insurance carriers.

With all funds raised in February supporting cardiac care, the staff of the Regional Hospital are thrilled that they can rely on community support. “We have thousands of cardiac care patients every year and many need important and often life-saving care,” said Dr. Paul MacDonald, cardiologist at the Regional site. “Community support like this is what enables the medical staff to do our job and it directly impact health outcomes here at home.”

After February, Megan plans to continue giving back, with a plan to do the same in May, for mental health and August and September for Cancer care. “I want to continue to give back. I have suffered from mental health battles and my mother went through her own cancer battle twelve years ago,” said Shepard. “It’s important for me to give back, because I know that what others have given has helped me when I needed it. Now it’s my turn to help.”

Since 1990, the Cape Breton Regional Hospital Foundation, in partnership with the community has raised more than $50 million to purchase equipment, and fund upgrades at the Regional Hospital. This has reduced wait times and provided an increased menu of services – closer to home. The Foundation has recently been accredited under Imagine Canada’s national Standards Program, which promotes transparency of charities and nonprofits, and strengthens public confidence in organizations and the sector as a whole 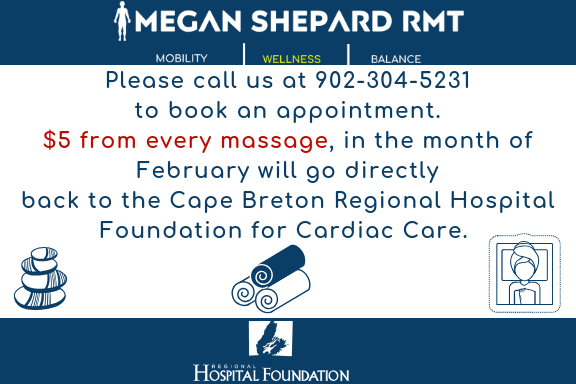