Cancer. It's scary. The illness is a group of cells growing where they don't belong. The cure is a community of people rallying around the person with the illness. Medical professionals are on the frontline, but behind the lines are friends, family, colleagues, and supporters. And without the entire team, the fight can seem insurmountable.

I'm Jill Taylor and I live in Sydney River. I am a substitute teacher and an online math tutor. And, I suppose, this is my story...

In 2012, my former partner (a then recent cancer survivor) and I hosted a dance fundraiser in Baddeck and, with the help of friends, raised $4000 to donate to the Cancer Patient Care Fund and the Cape Breton Cancer Centre. We learned that funding would be used to help people who face the financial struggles of a cancer diagnosis, and to help fund equipment for treatment options to be available in Cape Breton. We had seen how destructive cancer could be first hand and we wanted to give back to our community. I had met him right after his treatment and even after his surgery, there were life changing challenges. His physical recovery was not smooth. I saw the discomfort, I saw the sadness, and I saw the scars. But, I hadn't lived them. Not yet. Change is inevitable in life. When we separated amicably, I decided to relocate to Sydney.

A new city was an opportunity for a fresh start. And, after seeing some local theatre performances, I decided it was time to take a leap of faith. I began vocal coaching with now dear friend, Robyn Cathcart.

When we met, I would barely make a sound vocally, but Robyn's lessons helped bring out a side in me I didn't know I had. Because of his teachings, I got involved in the local theatre, and the dancing, singing and acting very quickly became a part of my life. It has ultimately played a big role in my story thus far. Not only did I get involved in theatre, but some of my closest friends have come from that community. I began participating in productions with Enter Left Productions, the Highland Arts Theatre, Cape Breton University and the Savoy Theatre. I learned to summon a strength, confidence, and courage I never knew that I had. Who knew that these experiences would play a big role in what braced me for the coming fight?

In April 2016, I noticed a lump in my left breast during a costume change at dress rehearsal for the Savoy Theatre's production of The Wizard of Oz. My heart sank. I knew that this was far from normal, but the show went on, and I told no one. I visited my family doctors in Baddeck (Dr. Chow/Genge) the following week, and after few weeks and several tests at the Cape Breton Regional Hospital, I received the call. I was diagnosed with an invasive ductal carcinoma. It  measured over 2cm, and I was referred to Dr. Smith for surgery. I had a partial mastectomy in July 2016.

From the beginning of my cancer journey, I have felt very supported by many. My parents, family and friends reached out immediately, helping me to process and navigate the initial diagnosis and have been by my side ever since. They, along with my medical team, encouraged me to stay positive and involved during a difficult time. I can't say enough about the staff and care I received at the Cape Breton Cancer Centre, from the kind smiles of the administration assistants, to the friendly nurses and doctors who always took time to make sure I was comfortable during appointments, and didn't leave me with any unanswered questions. 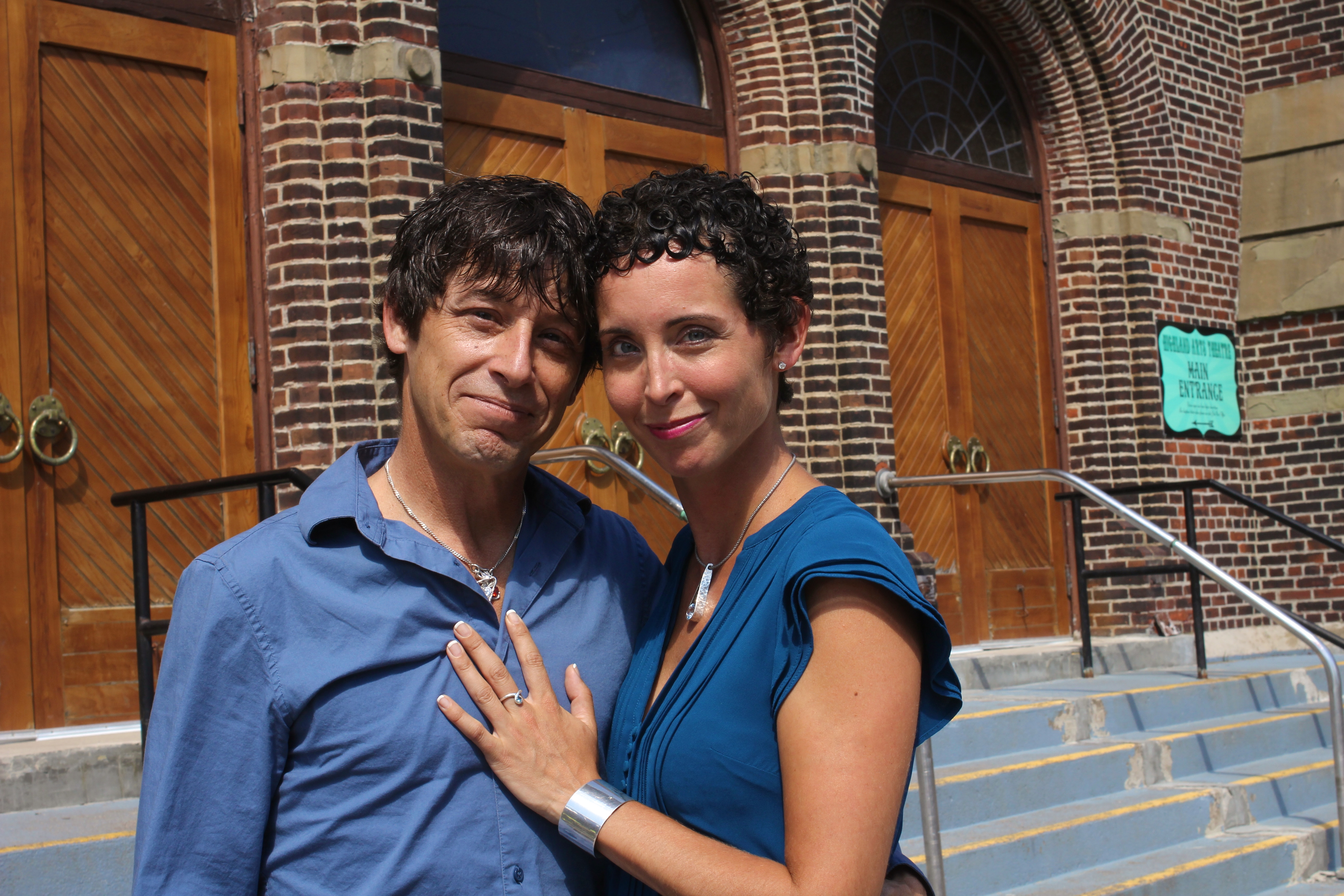 I met my current partner Rob Bowden, in mid-September 2016. He saw me in a past performance and decided that he wanted to meet me. Theatre. Am I right? At the time, I wasn't yet aware that I would have to start chemotherapy in early October 2016. The news hit us hard, as I had recovered from my first surgery and had just returned to work. Rob stood by me wholeheartedly through what were the hardest months, right at the beginning of our relationship. I think it's safe to say he's a keeper!

Starting chemo was difficult. I had to pull out of Annie at the Savoy theatre, and stop working for what we thought would be at least 6 months. It was a sad time, although Rob and I managed to "make lemonade," even the first time he shaved my head. My oncologist (Dr. MacCormick) and all the staff at the Cancer Centre were amazing throughout and made an almost unbearable situation, bearable. On the plus side, I was able to continue my involvement with some theatre projects. Everyone must have washed their hands and steered clear of me if they were sick, because I managed to make it through chemotherapy without getting a cold or flu. I was able to perform A Christmas Carol at the HAT nightly for a week in between my second and third round of chemo. Dr. MacCormick even delayed my third round by a week so that I would feel up to performing, and he attended the closing night production. It was amazing to see my oncologist in the crowd, there for me. It was a challenge to perform, but it was always worth it. And being on that stage summoned the energy to keep going every day. Our costume designer (and dear friend), Diana MacKinnon Furlong, even found a wig that matched my natural hair from previous year's productions. The audience had no idea that anyone in the cast was in the midst of a life-changing fight.

In many ways, I was lucky to only have three rounds of chemo instead of six. I was able to return to work in January. The support from staff, administration and students was awesome. I was comfortable in my wig or touque or straight up bald when my hot flashes were at their worst. I spoke to the older students about my journey, and they shared their stories with me. It seems everyone has a story.  When radiation was ruled out, due to several factors, I was referred back to surgery for a double mastectomy and reconstruction in Halifax (Dr. Porter/ Dr. Frank) which occurred in April 2017. The pathology report from my final surgery was "all clear" and I returned to work again. I'm still taking medication, I think it's important to note that I'm still in treatment. Life is good. But this cancer fight, will always be a part of my life.

The Cape Breton Regional Hospital Foundation is a registered charity and is responsible for raising and administering funds to help people like me. Through the Cancer Patient Care Fund, I recently received funding to help defray the costs associated with my medical procedures and travel expenses for appointments outside of Cape Breton. When I raised money for the foundation, little did I know that I was contributing to my future health. They rely on ongoing donor and community support, but being helped by the very program I helped to support really brings this story full circle. There are few people in Cape Breton who aren't touched by cancer. I realize that I still have a long road ahead. It has been made easier by the Cancer Patient Care Fund and the Cape Breton Cancer Centre. But, my story has been made possible by a lot of great medical professionals, and a lot of cherished people in my life who have seen me through. I think the most important message I can send is to surround yourself with the people who want to surround themselves with you. Cancer is beatable, a whole lot of people work every day to beat it. And, thanks to the Cape Breton Regional Hospital, I get to keep being one of them.