Every year, during the Scotties Tournament of Hearts, the Sandra Schmirler Foundation provides a grant to a local hospital to purchase life-saving equipment for their NICU to thank the community for supporting the Scotties Tournament of Hearts and the Telethon. This year The Sandra Schmirler Foundation is supporting an additional two hospitals in Nova Scotia. Their total commitment in Nova Scotia this year is $45,000.

“Our son was born only two pounds,” Said Tanya Laurendeau, whose son Andrew spent considerable time in the NICU at birth. “Without the support of the NICU, we don’t know where we’d be. This gift means the world to parents like us and kids like Andrew.” With this donation, two important and potentially life-saving pieces of equipment will be fully funded. Both the Near Infrared Saturation Monitor and a Bilimeter are essential to NICU care.

The Near Infrared Saturation (NIRS) monitor is a non-invasive way to monitor cerebral oxygenation allowing timely interventions that can help minimize the negative effects to the brain. Compromised infants such as those with cardiac disease, born premature, or birth asphyxia are particularly susceptible to brain injury during the first 3 days after birth.
The bilimeter allows for a non-invasive, pain-free way of quickly checking a baby’s bilirubin level and can help with diagnosis and treatment. All newborn babies born at the Cape Breton Regional Hospital undergo blood work to monitor the level of serum bilirubin checking for hyperbilirubinemia or jaundice. While most babies recover from jaundice, it can be devastating for brain development if the level of serum bilirubin reaches an unsafe level.

“The Sandra Schmirler Foundation raises funds to purchase life-saving equipment for babies born premature and critically ill,” Said Brad Sylvester Chair of the Board of the Sandra Schmirler Foundation. “We are very proud that we have been able to donate over 4.3 million dollars to 54 different hospital newborn intensive care units in every province in Canada, in the Northwest Territories and the Yukon.”

The Sandra Schmirler Foundation was created in January 2001 as a legacy to three-time world curling champion and Olympic gold medalist, Sandra Schmirler, in recognition and celebration of her love of family.

Since 1990, the Cape Breton Regional Hospital Foundation, in partnership with the community has raised more than $50 million to purchase equipment, and fund upgrades at the Regional Hospital. This has reduced wait times and provided an increased menu of services – closer to home. The Foundation has recently been accredited under Imagine Canada’s national standards program, which promotes transparency of charities and nonprofits, and strengthens public confidence in organizations and the sector as a whole. 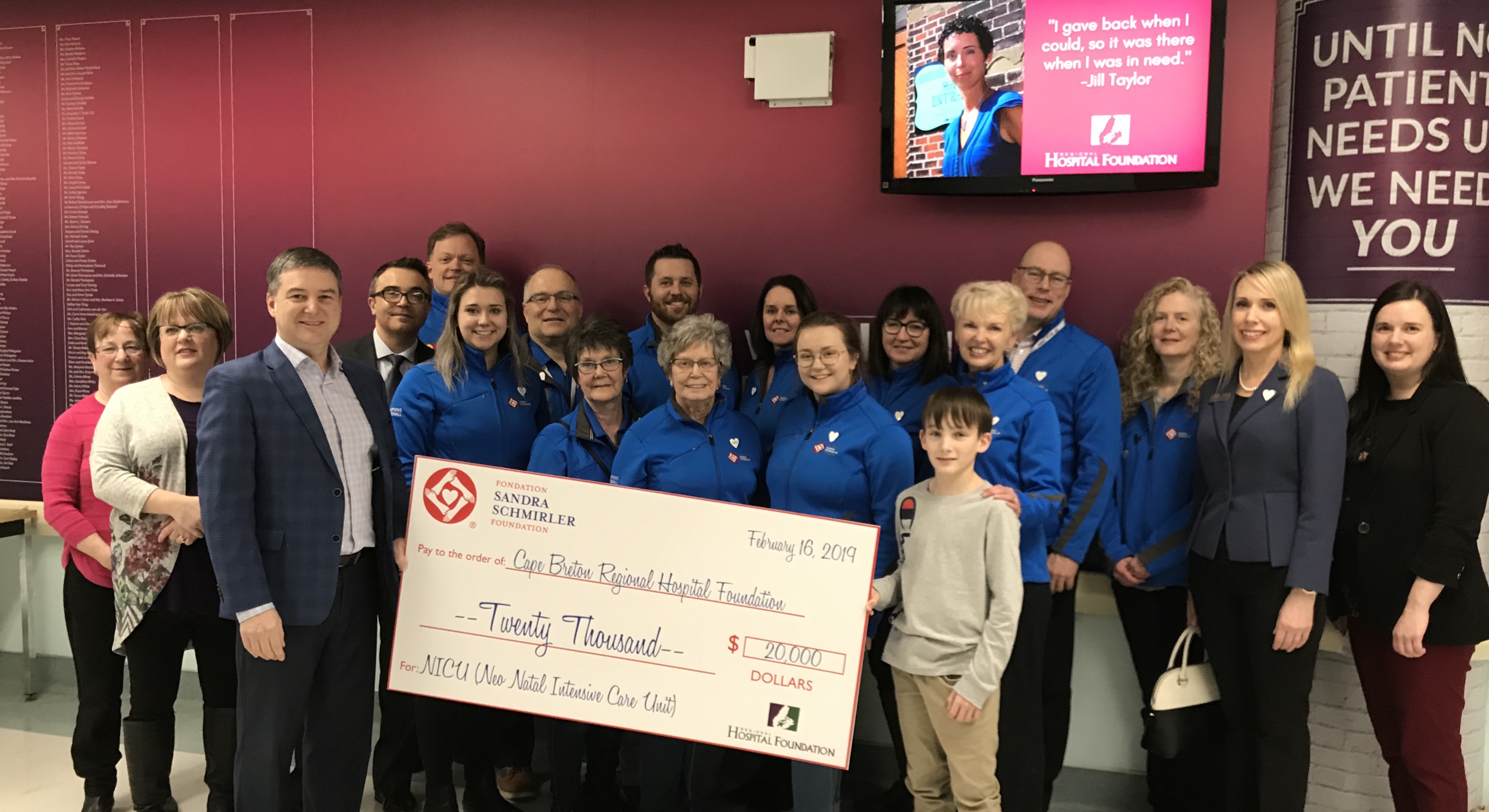